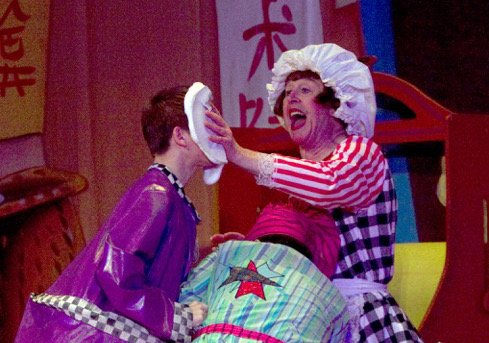 What Kind of Comedy?

The term slapstick comes from the stick that clowns used to whack each other with, usually two strips of wood fixed together with a handle that slap together when they make contact with somebody’s rear end, making it sound like the recipient has received a much harder whack than they really have. Splosh of course is custard pies, water, paste, flour etc. and for my money the more of these we have in a pantomime the better.

All ages love to see water or custard pies thrown about and it always guarantees big laughs but these days many managements don’t like it. Firstly because it costs money to buy large quantities of flour, shaving soap and so on and then you have to clear the mess up before the show can carry on, which doesn’t please the crew either.

Also patter comedy can date and become unfunny but slapstick and splosh never do. Think of Arthur Lucan, as Old Mother Riley, hanging from the Welsh dresser as the crockery smashes around him. That scene was first performed by him eighty or ninety years ago and it’s still very funny. (You can find it on DVDs of his films and on You Tube)

Or what about the great clown, Charlie Cairoli, he really was the greatest ‘splosh comic’ ever. He performed wonderful slapstick routines at the Blackpool Tower Circus for forty years. In 1972 he starred in ‘Jack and the Beanstalk at the City Varieties theatre in Leeds and it is considered to be the most successful pantomime ever produced at that venue.

The greatest laughs in any pantomime are when the comics fall over or the dame loses her knickers or the bad guy gets a bucket of splosh over his head and I am pleased to see that a few producers are once again putting these scenes back into their productions. Last year I played dame at the Playhouse, Whitley Bay, for Blue Genie Productions , and the producer, Gary Telfer, said he wanted a splosh scene but it had to be full on, not a little dollop of instant shaving cream on a cardboard plate. I was delighted that he was prepared to pay for it to be done properly and needless to say it was a big success every performance.

My local theatre, The New Marlowe, in Canterbury has this year a wonderful comedy bathroom scene which uses hundreds of gallons of water every performance and is guaranteed to bring the house down. Producer Paul Hendy has invested much money in this type of comedy because he knows from experience that this kind of comedy always gets results.

So all you producers out there that have turned your productions into more of a mini west end musical than a traditional pantomime, bring back the slapstick and the splosh and let’s hear the laughter ringing through the theatre once again. You cannot beat it.

Paul Harris has been in the entertainment business since he was a teenager, starting out as an actor in repertory and later moving on to the light entertainment scene, where he played most of the major venues in Britain as a compere/comedian in Summer shows, variety, music hall and cabaret.

On television he has appeared in shows as diverse as Crimwatch UK for the BBC, the Gloria Hunniford Show’ for UTV, ‘Home James’ for Thames TV and most recently a programme for an American television company extolling the virtues of entertainment in London.

His writing career started in the late 1980’s when he was commissioned to write sketches for ‘The Two Ronnies’ television series. Since then he has written for theatre, radio, television and various magazines. In 1996 his book about Pantomime was published and has continued to sell to this day becoming known as ‘the bible’ for pantomime producers and actors. Paul has also written a play about the great singers around in the 1940’s and 50’s called ‘Love Songs and Legends’ and a play about the life of comedian Frankie Howerd titled ‘Frankie Titters On’.

Paul has appeared in over forty pantomimes throughout the country and has become known as one of Britain’s premiere panto Dames, he has also written, directed and produced many of them. As Dame he has played ‘mother’ to many of our top performers including, David Jason, Frank Carson, Canon & Ball, Larry Grayson and many television presenters and soap stars. Paul has written and presented for BBC Radio Four, BBC World Service, LBC and for the past eleven years has presented a weekly programme for BBC Radio Kent, interviewing most of the major entertainers in the business including, Shirley Bassey, Buddy Greco, Stefanie Powers, Michael Winner, Sir Donald Sinden, Vera Lynn, Henry Cooper. Petula Clark and many, more. This year and next he is hosting a series of ‘Evenings With’ in theatres around the country with Opera star Lesley Garrett, singer Jonathan Ansell, actor Derek Martin, legendary football manager Tommy Docherty and cricket commentator Dickie Bird.