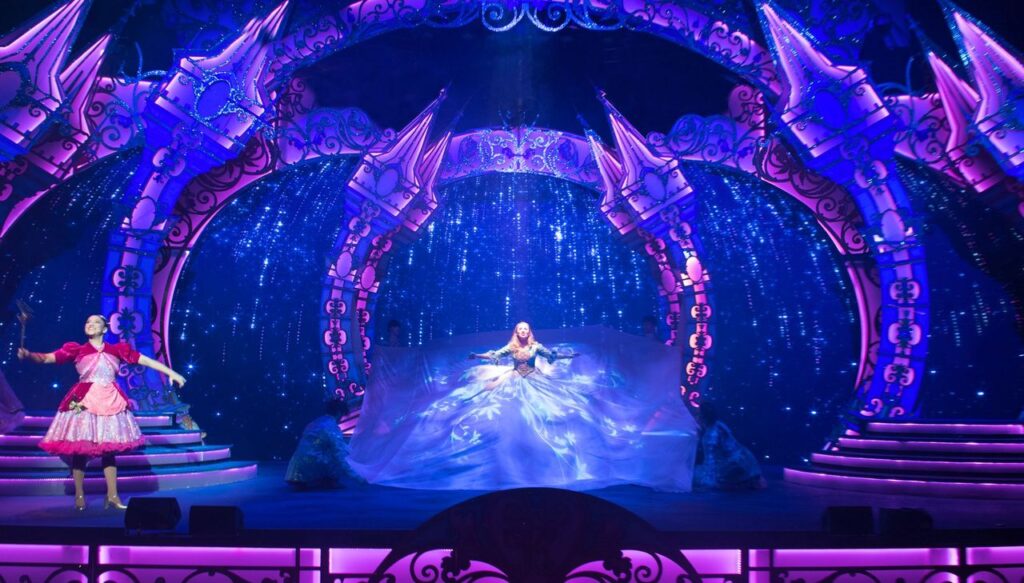 Video and Projection Design for Pantomime

I have been thinking back to this time last year when we opened Cinderella at Fairfield Halls a great deal recently. This was – for the pantomime industry – a bright new way to design and realise a pantomime whilst retaining the look of the genre but adding a big dose of very bright sparkles and I loved the bold beauty of what it became, not to mention watching the children from our first school audiences as they entered the auditorium chatting only to be stopped in their tracks to gaze in awe, mouths open at the set that proudly stood before them. We knew they were in for a treat.

Imagine Theatre had approached me in July and shared a beautiful sketch drawing of Mark Walter’s proposed set design and I could see that they were going big and bold with the video integration which was hugely exciting in terms of the potential it offered and they knew it too. Not only were there five huge LED screens set into the arches of the set, but all the light boxes within the arches of the set were lit with LED that we could map with video too.

Mark’s designs are always beautifully lyrical and he is a real specialist in the genre, so we knew we had to make sure that his style carried through sufficiently. We spent around three months discussing the imagery, sharing sketches and my team effectively learned as best we could to make imagery in his style across this time so that when it came to evolving the new images or adding elements that were required through the production process, we knew how to go about it.

Instead of flying cloths for scene changes, we were able to take the audience on an animated journey to the next location or simply arrive there instantly in a flash of colour and light. The most complex sequence was probably the transition into the village. Once we had learned how to work with Mark’s Illustrative style, we pushed it a step further and created a 3D village in the same style, mapping hand drawn textures onto the buildings and adding running water and birds to create a really compelling arrival into the first scene. Tim Vine, who was playing Buttons, seemed to derive endless amusement from these effects. The fact that we were working in video too meant that we could continue creating and responding live to ideas throughout the process and incorporate them into the setting, working with the rest of the team to make it richer by the minute.

Some of the LED screens were operated on an automated flying system so we could use them as entrances and sync content and haze to make their flying mechanism disappear as a pumpkin or coach appeared.

One of the high points of the show was Cinderella’s transformation from rags to ballgown. This took some tech-ing but it was well worth it with projection mapping bringing an expansive silk skirt to life with patterns and imagery while a live on-stage costume change happened underneath the cloth before sending her off in her carriage.

Mark and I both learned a great deal in the process. For me, it was my first year in panto having just worked on the CBeebies Christmas show a month before. Mark was really supportive and trusting of our process and we of his craft in the genre he knows. We were really two sides of the same coin by the end! We’ve really missed developing our ideas further this year and building on the success of Cinderella. It was lovely to be jointly awarded best design for Cinderella with Mark under lockdown but we’ll have to wait until next year to repeat and evolve what we can offer as a team.

Nevertheless, one of my team, Matt Brown, has been working with the Belgrade Theatre in Coventry to realise their streamed Jack and The Beanstalk and we will be back bigger and bolder than ever next year.

Award winning independent Video & Projection Designer Nina Dunn uses light technologies to augment narratives and environments. Her work is predominantly in Theatre where she prides herself on bridging scenic, narrative and lighting disciplines using the infinitely flexible medium of integrated live video. She is the UK’s most prominent female video designer and founded the Video and Digital Design module at RADA four years ago. Nina now lectures at Rose Bruford College. Over the past ten years, she has created work for ATG, The RSC, The National Theatre, ENO, Cameron Mackintosh, The Royal Opera House, Bill Kenwright, Edinburgh International Festival and Durham Lumiere among many others both in the UK and internationally. Other areas of practice include Live Events, Museums and Public Art. Nina works alongside a team of expert content creators, specialist producers and programmers that are hand-picked according to the needs of each project. Her approach is designed to be highly scalable so as to provide for shows ranging from the large scale, high profile commercial touring show to the smaller theatrical workshop as reflected in the wide range of projects showcased here. The studio is based in the heart of Brighton, UK.