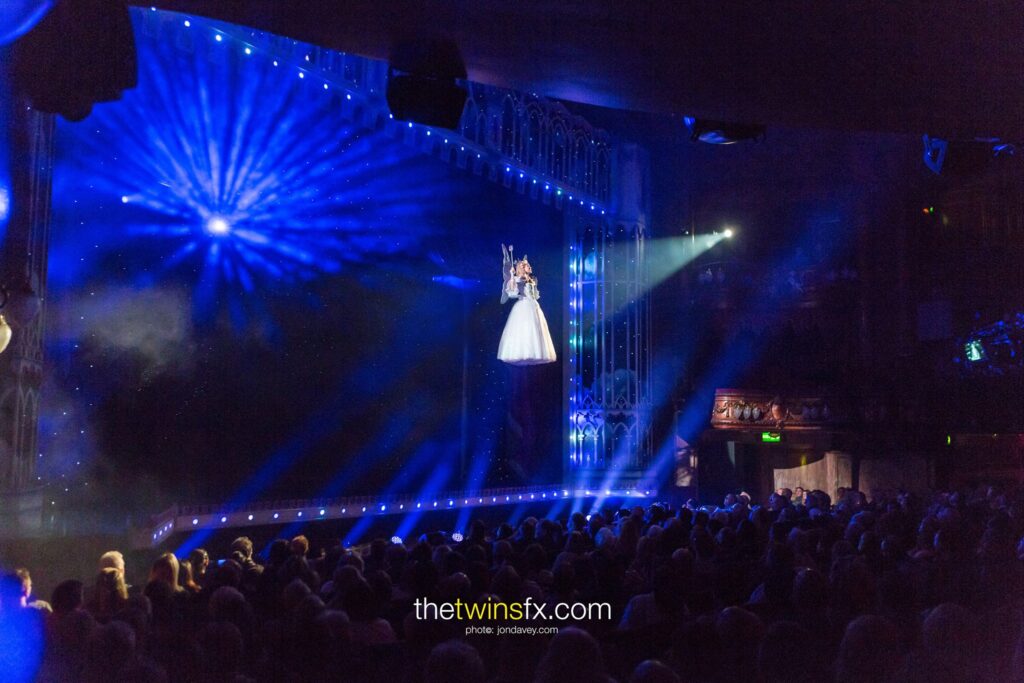 Written by: The Twins FX

From start to finish the process to create some of the our effects that we produce for panto takes up to 12 months in advance of the shows. We usually start some kind of dialogue towards the end of the year and set up a meeting for early Feb with clients to look at requirements.

Prior to that we have a brain storm session with our creative team and come up with ideas and drawings of all sorts of creative thinking. Each year we try and be a little more futuristic than the year before. Obviously some of the ideas that we put forward for the following year might not become reality until a year or two later. We tend to make on average just for panto alone 5-10 big builds that keep our teams on their toes through the year. Once we have finished our own sifting process we will have the final ideas drawn up ready for our client meeting so that we can present. We will usually take with us to the initial meetings at least 100 rough ideas for magical effects/illusions.

Next comes the discussions around the restrictions of the theatres. Don’t forget even though we might make an effect for a specific show in a specific location, we have to be sure that it will fit the majority of the first houses across the UK. So we have to look at door heights, stage point loading, loading bay access. For instance if you have ever visited the Kings Theatre you will know that the dock door is 6ft off the ground and directly out onto the street. There is no fixed access so each time they have to build a deck that can support the effects off the lorry and then a team of skilled technicians are required to haul the effects up a very short steep ramp, the same process for the OUT and its down a ramp onto a deck!!!!! If you have seen some of our effects then you will have some idea of the technical problems that have to be overcome.

Once we have agreed the 5-10 builds in Feb we set about with the creative teams in the workshops pulling together the project plan and we start the build. We have a core team of 12 staff but at our busiest, there are as many as 40 model makers, painters and engineers working away in their workshops, like a crack team of seasonal elves. The process of design and construction does take up to 8 months in most cases and we usually work to a complication date of the end of September early October. This gives us the time to allow for the testing of all of the equipment. The logistics of getting all of the effects from our workshops/storage facilities can mean that we have up to 45 Mega lorries turn up over a three day period to load and ship across the UK . For some of the bigger shows there can be up to 3 mega lorries for a show just with Twins FX effects in.

We start the same process as you are all sitting watching opening night we are working on the following year already. It’s a full 12 months process and we love it…

The Twins FX are leaders of theatrical visual special effects, illusions and animatronics. They make the impossible possible for theatre productions, film and television worldwide. Their portfolio includes soaring airborne flying dragons, a mighty 7m tall gorilla, slithering sea monsters, a hovering helicopter, monster sharks, Santa’s levitating sleigh, a life size T-Rex, the world’s largest pantomime Giant, Cinderella’s flying sparkling crystal coach, floating magic carpets, flying cars, 3 flying life size horses pulling a coach, a pink moped that flies and loops the loop in mid air, man eating crocodiles, a flying full size London bus, a terrifying dragon…. You name it, they’ve done it. The Twins FX were recognised as part of the creative team who helped Qdos Entertainments achieve their Olivier Award in London in April 2018. Dick Whittington at the London Palladium was nominated in the category “Entertainment and Family”. It’s the first time that a pantomime has won such a prestigious award and a first for Pantomime in London’s West End. The Twins FX is led by identical twins Gary and Paul Hardy-Brown, located in Wareham in Dorset. “Coming into work is never boring or a chore because we genuinely love what we do,” says Managing Director Gary. They have a core team of 10 staff but at their busiest, there are as many as 40 model makers, painters and engineers working away in their workshops, like a crack team of seasonal elves. “We have pioneered flying in recent years with the bespoke system “Flying without wires”; the audience sees a person or an object move around the stage and then the auditorium with no visible means of support”. Paul, Creative Director, continues : “We are a one stop shop and we do everything ourselves: designing, creating/building and delivering the wow factor”. Our slogan is, we make the impossible...possible.” Starting out as holiday season Bluecoats, delivering captivating magic and illusion shows as part of Pontins’ entertainment programme, the twins worked this up into a slick double act which then proceeded to tour around the world for 15 years, becoming bigger and more ambitious as the years went by. In 2004, The Twins were commissioned to create Cinderella’s Fairy Godmother to fly over an audience, which steered them towards special effects and away from performing. Since then they have established themselves as the market leaders in large-scale theatrical effects, working on arena shows such as Jeff Wayne’s ‘War of the Worlds’, 'Doctor Who Live', the UK tour of 'Barnum' and ‘Hamlet’ with Benedict Cumberbatch in the title role. The Guardian said of The Twins FX’s contribution to the ‘Hamlet’ production - “the effects are striking”. Timeout applauded the "visually and atmospherically stunning productions”. The Twins FX added effects into London's West End musical ‘Thriller LIVE’ and ‘Impossible’- the world's greatest illusionists live on stage in a magic spectacular. Twins FX helped to bring pantomime back to London’s West End after 25 years with the much acclaimed production of Cinderella. They have also created stunning effects for all three Butlins resorts, BBC’s ‘A1-Britain’s Longest Road’, 'The One Show', Michael McIntyre’s ‘Big Show’, ‘Strictly Come Dancing’, ITV’s ‘The Next Great Magician’, ‘Britain’s Got Talent’, ‘Britain’s Got Talent : The Champions’, ‘Tonight at the London Palladium’, ‘Keep it in the Family’, Sky’s TV Hit ‘Brassic’ and C4’s ‘8 of 10 Cats Does Countdown’. The Twins FX have also supplied effects for Hollywood blockbuster movies 'Now You See Me 2’, ‘The Mummy’ and have even supplied effects to the heavy metal band Avenged Sevenfold’s music videos….