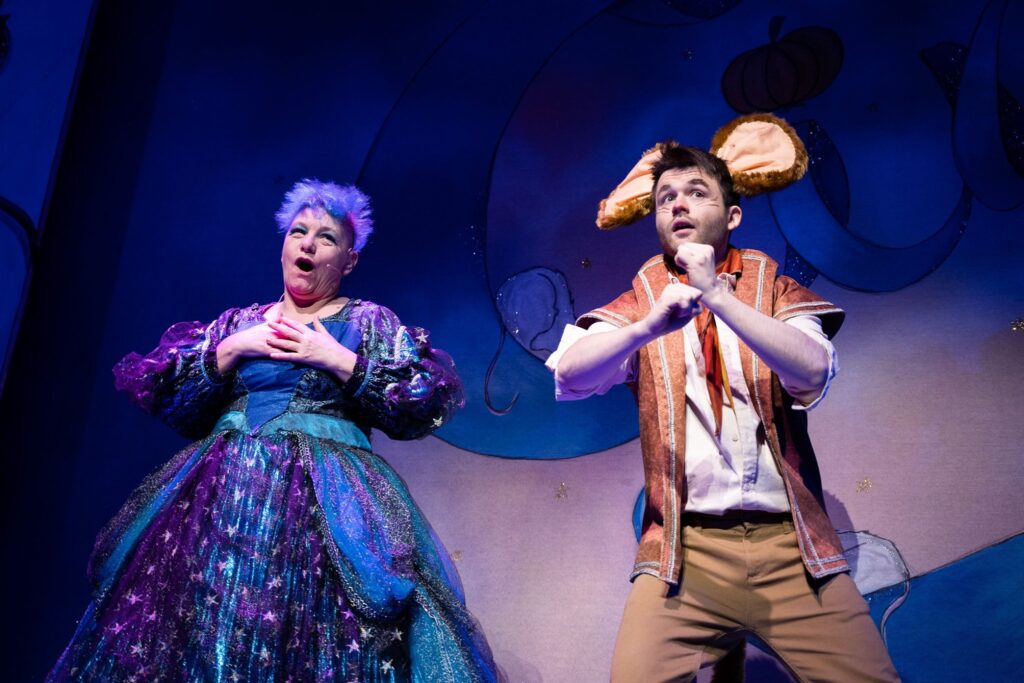 Whenever I go to see a show with captions on a box away from the stage and or sign language interpretation at the side of the stage, I feel I’m sitting in a doorway with creation in one room and access in the other. My head turning one way or the other like watching the ball to-ing and fro-ing at a tennis match. I do not feel fully included as an audience member even though the effort has been made to supply access in the one show of the run.

May I suggest you make access to your shows more creative? Inclusive? For every show? Fun? If you’re going to fork out money to caption one show, why not make it every show? When you design the sets, put a screen in as part of the set and project captions in different colours and fonts for the characters. BANG! That’s creative access.

Inclusive interpreting means the interpreter is in costume and amongst the actors on stage, now I can see who is speaking. BANG! I’m included. It has been done, it is possible.

At Cast Doncaster, they have been doing this for the last few years, making the show accessible every day for deaf people in the audience. In Cinderella, director Madeleine O’Rielly cast deaf signing actor Connor Bryson as Mouse, who was included in every scene and even had an impact on the plot. Myself as Fairy Godmother opened the show in SSE (signed Supporting English) then introduced Mouse who became the silent narrator. Audiences deaf and hearing loved Mouse. You can apply for funding to include creative access, which can be done by other characters on stage. If you have deaf people acting in your panto you can apply for ATW (Access To Work).

Did you know some deaf people sign songs? I’ve been in the cabaret and festivals circuit signing songs for several decades now. Check my TEDx talk ‘Singing without my voice’ for examples. When Cinderella (played by Dora Rubinstein) sang the song before getting on the magic coach, I as Fairy Godmother signed the song alongside her.

If you do include signing in the show, please allow time to translate the script, creative translation takes time. Allow for this in your budget. When actors are with the musical director, the signing actors could be there too, trying out different ways to sign the song. It is useful to have the same interpreters for duration of rehearsals with deaf actors booked. This gives continuity as they gain knowledge of whose who and what is happening. Please have a team of interpreters to swap 20 minutes shifts during the day. If you want to know why, put a radio play or audio book on and repeat every word said indicating who is speaking without falling behind or missing any words. I promise you, you’ll be done in 10 minutes.

As we all know Panto is inundated with puns! This is very English language based on sounds. Not deaf humour at all, so we have to come up with visual representatives of humour. Sometimes this can be done. This takes time and lots of exploration. Also there is add-lib which is a challenge for deaf actors on stage. During our run of Cinderella we had our SLI (Sign Language Interpreters) in a nook by the stage signing add-libs to a camera, which was projected on to screens on the balcony next to the screen of our musical director. BANG! Panto can include deaf performers and audiences.

Caroline recently appeared in Ramps on the Moon’s production of Oliver Twist playing Fagin. Other roles include Tabaqui in Derby Theatre’s The Jungle Book and Sir Toby Belch in Southwark Playhouse’s Twelfth Night. TV appearances include Doctors (BBC), Murphy's Law (BBC), Stuart a Life Backwards (BBC/HBO) and Switch (BBC). With such companies as Krazy Kat Theatre, Hot Coals Theatre and The Bone Ensemble, Caroline has also consulted/directed tweaking their visual creations, finding and evolving the funny, and clear physical storytelling. Caroline also appears in the stand up comedy circuit and is a member of Abnormally Funny People. On the cabaret circuit, Caroline performs in her unique style signed songs, she recently gave a TEDx talk on 'Singing Without Her Voice'. Caroline makes music accessible to deaf people and sign language accessible to hearing people by rendering well known recorded songs such as Kate Bush’s 'Wuthering Heights' and Queen’s 'Bohemian Rhapsody' in sign, dance and mime utilising her physical theatre skills to express songs like you've never seen before. She also signed the finale song of the 2012 Paralympic Opening Ceremony ‘I Am What I Am‘ sung by Beverly Knight.