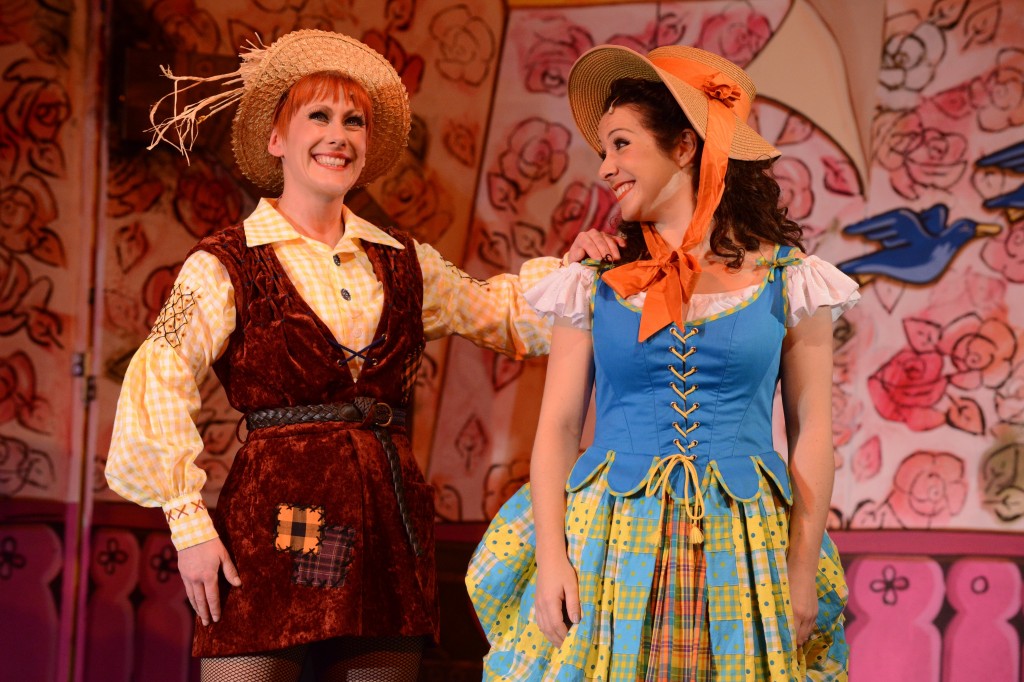 principal girls and I’ve even had the chance to play principal boys. Now this is something that I thought perhaps wouldn’t happen being only 5ft tall, although the 3 and half inch high heel boots that I wear on stage are very helpful for increasing my stature! I’ve been lucky enough to have this opportunity as the legendary writer, director and dame that I’ve worked with over the last 15 years has been Kenneth Alan Taylor at the Nottingham Playhouse.

Some commercial pantos prefer to use a male actor these days as a principal boy but Kenneth tries to stick to tradition where he can and use a female in the “breeches role”, even short ones like me.

The “breeches role” became popular in panto during the late Victorian and Edwardian eras when it was considered very daring to show even your ankle. Actresses playing these roles in panto were allowed to show their legs, making panto a rather popular art form, with well known music hall stars of the day such as Florrie Forde showing a shapely thigh on stage.

girl and that you don’t try and play the part of a boy but bring your femininity to the part, which is of course helped by the short tunic, fishnet tights, high heel boots and the traditional slap of the thigh.

Even wearing a full ladies stage make up is important. I never play principal boy without it and without my false eyelashes. It’s amazing that audiences accept that the boy they are watching is in fact a girl but I think that is helped along if you play the truth of the story in the script. Kenneth always tells us to “remember the tinys”. The story is so important to them and if you play it truthfully and honestly then not only will the children believe that you are that boy character but so will the rest of the audience.

This year I’ll be playing Jack in Jack and the Beanstalk opposite Kenneth as my mum, Dame Daisy Durden. As Jack I really have to handle most of the

story and plot and it’s so important to remember to play the serious parts truthfully. When poor Jack has to sell Buttercup the cow there should be real sadness followed then by the fact that he is utterly convinced that he is doing the right thing swapping her for a bag of magic beans. Or when he says he is going to climb that beanstalk, there is real bravery and determination.

Of course there is also lots of song, dance, fun and laughter along the way and the magical thing about panto is that because of how the audience react, it’s almost a different show every time.
Just writing about panto has made me feel all excited so I’m off to learn my script now before my rehearsals start! It’s the best job in the world and I wouldn’t want to be without it during the Christmas season.

To everyone in pantoland, I hope that you have a wonderful panto season and happy Panto Day to you all.

Rebecca trained at the Arts Educational School Tring (now known as Tring Park School for the Performing Arts) where she became Head Girl. She concluded her training on the Musical Theatre course at Arts Educational London gaining a Diploma. Rebecca is Co Artistic Director of theatre company Little Pixie Productions, which she runs with her two sisters, which is dedicated in taking original writing and productions out into the community and rural areas. Rebecca still regularly performs in theatre throughout the country and some of her theatre credits include: Granny’s Big Top Tale, Turned Out Nice Again! and What Became of the Red Shoes? (Little Pixie Productions); Tracy Beaker Gets Real and Forever Young (Nottingham Playhouse); Bless ‘em All (Pocket Panto); Silence (Momentum Festival); Sing-a-long-a-Eurovision (Dublin and UK tours); Macbeth (Chester Gateway); Goldilocks (national tour for Tutti Frutti Productions); The Fly, Straight and Narrow, Simply the Best, Canterbury Tales and Loadsamoney! (Oldham Coliseum).Rebecca has also performed extensively in pantomime, mostly at the Nottingham Playhouse. Credits include: Robin Hood and the Babes in the Wood, Cinderella, Mother Goose, Beauty and the Beast, Aladdin, Dick Whittington, and Jack and the Beanstalk. She is also a regular performer of Victorian Music Hall. www.littlepixieproductions.co.uk @LPPtheatreCo