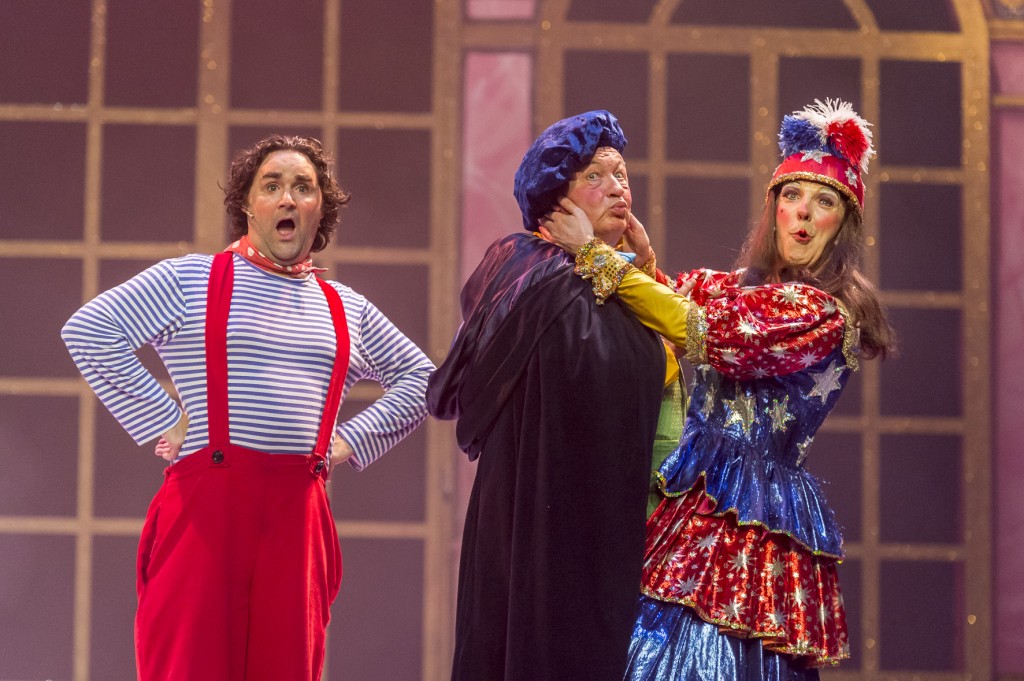 Essentially, it’s a song,…on a sheet!

But in reality, it becomes ‘The end of the show, Show!’

It’s a chance for the comic to have some fun with the audience, virtually unscripted.

I’ve played the comic for many years now, in many pantomimes, all over the UK; partly because I WAS one of those kids that volunteered to go onstage & be interrogated by the prat in the dungarees! (This was at The Coventry Belgrade, when I was 5, with the genius that is Iain Lauchlan). I loved it so much, & I remember laughing ‘til it hurt, I knew I wanted to spread some Christmas cheer in the same way.

So here is my recipe for a panto songsheet:

Start by tying-up the show. Maybe try “I love a happy ending. The princess got her handsome prince, the dame got her dish & all I got was a grain of rice,… thanks,.. Uncle Ben!”

The audience have to feel that the official show has ended. They are now entering the ‘after party’!

I often add that I fancy singing a song at the Royal Wedding & ask the audience if they’d like to join me.

I then produce a tiny piece of paper from my pocket, with the song lyrics written on it. I ask if everyone can read it? (99% shout “NO”,.. but there’s always that 1 nutter, with 20/20 vision, sat on row Z, that insists he can read every word. Ignore him, he has just had too much Sunny D & is merely trying to impress his teacher.

Sweeten the deal, by magically summoning a giant screen from above. (No cotton or silk sheets here!) Written on this screen should be a well known, simple & upbeat song, with actions. (I have used many songs over the years, from Gangnam Style, to A Pizza Hut, via I am the Music Man & The Birdy Song). The song, bizarrely, isn’t that important, but the energy is.

Billy Pearce (no relation) does a wonderful megamix / mash-up of popular songs up in Bradford, that goes down a storm!

Next, invite 3 children up onto the stage. (Three is definitely the magic number here!)

Divide them equally. Ask one to stand on a “trap door”, another to “stand under a grand piano” & the third victim / volunteer to stand “facing the sniper”. This confuses, disarms and stirs them up nicely,.. (letting them know it’s ok to be silly).

Further mix them up, with a little ‘Name Game’. If they say they are called ‘Miya’, add “not Miya – normous bottom?” or if one lad is called ‘Neil’ (proceed to kneel beside him), you get the idea.

Continue to roast them by:

Where are they from? This often stumps most people, so ‘Planet Earth’ usually suffices!

What school are they at? Gets a huge cheer.

Are they Married? (Most then admit to having a boyfriend / girlfriend, or gurn their faces, disgusted by the very idea of a spouse.

(If they are tiny, you can ask them if they “shrank in the wash?”) I tend to kneel down, to their level, to be less intimidating.

Demonstrate the song & actions, then encourage the three amigos to join in.

Sprinkle a little competitiveness, by dividing the audience into two. I often ask a lady to ‘close her legs & choose a side’ at this point.  Left versus Right, Boys V Girls, Smart Fellas vs Fart Smellers (just have some fun here.) It ALWAYS ends in a draw, so just twist & shout, ‘til they’re all worn out.

It’s nice to decorate the volunteers with a gift bag at this point. (It used to be supplied by Woolworths, but I’m showing my age now!) Any shiny bag, full of sweets & treats will be fine. (I once had my gift bags distributed by a ‘glamorous assistant’ from ‘Staly Vegas’, whilst performing in Manchester. This is an optional extra. I believe my assistant now works in a ‘tripe shop’ in said town!) If you have the nerve,.. leave one child without a bag,..for as long as you can.

You are now on the look-out for a ‘Thumbs-up’ from prompt corner. Bringing you crashing back down to earth. Reminding you, that you are only there as a filler; whilst the crew frantically change the set behind the front cloth, before the grand central, sparkling staircase is revealed.

Then it’s time to ‘make like a Banana…& Split’ (as you only have about 10 seconds to completely change costume & climb the rickety stairs for your bow).

I hope this method helps in some small way. It’s less of a ‘formula’ more of a list of ingredients for a songsheet. Above all, enjoy yourself. It is Christmas after all.