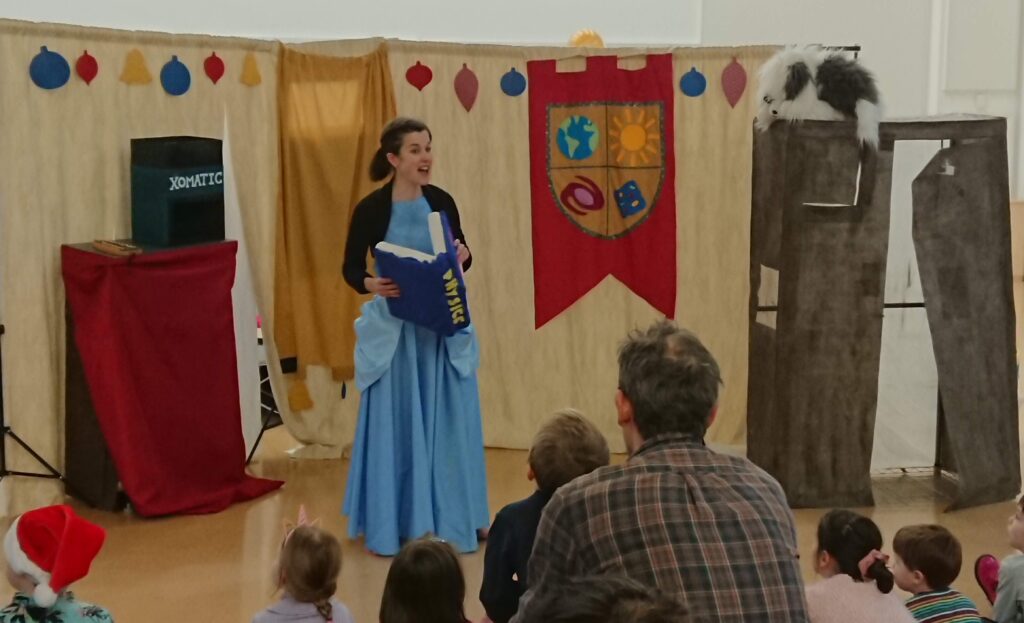 Panto in a Pandemic: The Little Astronomermaid

“He’s behind you!”. The bedsheet serving as my backdrop is semi-transparent and the outline of my mate Andy is clearly visible. Tufts of his charity shop Amy Winehouse wig appear above the sagging fabric. Andy is the Dame in my panto; he’s currently playing the part of “setting up the milk bottle xylophone for the next scene” because there’s only two of us in the show and I’m on stage.

It was 2019. An actor, physics teacher and parent, I’d reached boiling point with the gender stereotyping in my subject and Disney films, and decided to lambast both at once. Cinderella the Physicist saw the fairy godmother replaced by an enchanted physics book, the heroine using hard-earned science skills to write her own happy ending. Funded by the Institute of Physics, it was low budget, free to attend, and enormous fun. Pantomime handles being low-budget surprisingly well; bad jokes and dancing cost nothing. Besides, things going wrong is the best bit, and the cheaper the show, the more likely that is to happen.

I was happily buying blue bedsheets for 2020’s The Little Astronomermaid when spring lockdown happened. Real-life projects being cancelled, I wrote a science lesson for under 14s and streamed it free via Facebook live. Thousands of people came. So I did it again. And again. I got regulars. Nearly a year later, kids are still coming to the show. We’ve covered volcanoes, poo, conkers, black holes, woodlice… we’ve never met in real life but we’ve built seismometers out of bean cans together and are very fond of each other. Everything I do is free to attend with no log-ins or sign-ups. People just come to my Facebook page at the right time with a variety of household objects and get stuck in. Increasing numbers of lovely people support me monthly on a website called Patreon which keeps me going.

So I was more prepared than most to put my panto online. It’s where my audience are, so was the obvious choice. Besides, I’ve been through so many painful learning curves performing online. Why waste them?! One of the hardest things to get used to was the lack of audience feedback. All creative people seek approval all the time (right?) and acting confidently in its absence was weird. And by “audience feedback” I don’t mean belly laughs, though those are nice. It’s the little things; eye contact. Lack of fidgeting. An audience says “we’re listening” in countless small ways. Learning to live without them took a long time, but has made me a stronger performer. I have to trust my own opinion.

The feedback I do have is comments. I find them absolutely vital. How the show’s coming across to the viewers isn’t always obvious. This makes you very vulnerable to looking like an idiot; akin to performing in a theatre with the fire alarm going off and not acknowledging it. Especially in the early days, a stream of comments bellowing “it’s upside-down!” “you’re glitching!” was painful, but useful.

With more experience, comments fulfill another vital role; they prove the show’s live. And I can’t overstate how important that is. For audience numbers; as a parent I know the power of being able to shout “hurry up, it’s starting!”. For engagement; the kids know that if they say something funny or ask a question, I’ll pick up on it. And it’s infinitely more fun for me. I did one show where the comments weren’t working and it felt like performing to the edge of a cliff. At first I found them immensely off-putting. They slowed things down because I felt the need to reply to every question. But I remember someone a few months in writing “how long will this last?” And breaking off to say “Mmm. As long as I like I guess” and all the regulars pressing the laughing button, and thinking “I’ve found my feet here. It feels like the audience are entering my space now, not the other way around”.

Audience interaction is never more important than in panto. In mine, Ariel the mermaid is doing a live vlog, enabling me to reply to comments without breaking character. It’s a science panto, so the gag is that due to the speed of sound she can hear the audience, but with a delay. “Oh yes it is” *Five seconds of frowning at the screen* “OH YES IT IS!”. Will it work? I’ll watch the little audience number in the corner of the screen going up or down and let you know.

Obviously nothing beats performing to people you can see and hear. But there are massive benefits to going online. I cannot count the months I poured into Cinderella the Physicist. Painting that bedsheet, hand sewing costumes, constructing talking textbooks that would grab the eye from a distance, devising science experiments that could be safely performed a metre from a small child but also seen by one sitting at the back of the room, researching an affordable speaker that would project music loud enough to sing over, I could go on. It took forever. And still looked a bit crap.

Online, the mini becomes massive. I can – and will – stand in front of a box covered in tin foil and have entered a spaceship. Costumes need only be detailed from the shoulders up. Subplots can be performed by Lego characters (see you in 2021 Andy x), with A5 photographs providing backdrops far more dramatic and opaque than I could ever afford on larger scale. Mighty oak trees can be convincingly – or at least amusingly – represented by pieces of broccoli. A single party popper can be an explosion, a candle a forest fire.

This year has taught me that it’s not a show’s budget that’s important, it’s the liveness. Because what liveness does more than anything, is it delivers the thrill that things might go wrong. And as pantomime has proved time and time again, there’s nothing more magical than watching confident, well-rehearsed performers dealing poorly with theatrical mishaps. I for one am going to keep that magic alive for my audience this Christmas.

‘The Little Astronomermaid’ will be streamed live from Theatre of Science’s Facbook page at 10.30am and 6pm on Monday 21st December. See the ‘events’ section of the page for details of what to bring to join in with the experiments. https://www.facebook.com/events/756009021626569

Lara Stafford runs the science communication company Theatre of Science. The actor-turned-physics teacher began streaming free lessons from her Facebook page during the March lockdown. Hundreds of families still attend the now award-winning shows. Her science pantomime The Little Astronomermaid is also free and will be performed live on December 21st.