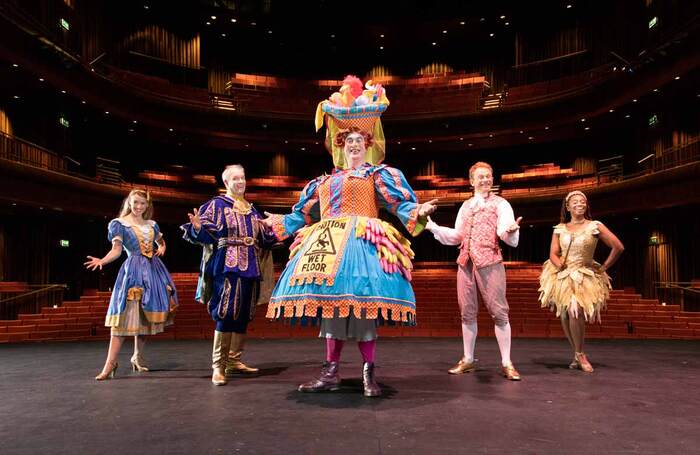 Panto in a Pandemic: Evolution Productions

Pantomime is a stronghold of British Theatre. Audiences eagerly wait all year to come to the theatre and laugh, cheer, hiss and boo – and have done for as long as we can remember! Pantomime will ordinarily dominate theatrical programming during the winter season – and audiences can’t get enough of it! However, 2020 has been a season like no other.

The on-going COVID-19 Pandemic has affected the global economic infrastructure and has caused chaos on all our lives, and livelihoods. As we strive to return to a (more sanitised) version of normal, the pandemic is still a very real threat to our theatres, and an immediate ongoing threat to our pantomime season.

Evolution Productions is a family business, run by Emily Wood and Paul Hendy. They have built a reputation for superior, bespoke pantomimes. As a testament to their work they have won ‘Pantomime of the Year’ at The Great British Pantomime awards three times in the past four years; and they pride themselves on high quality production values, strong casting and genuinely funny scripts.

The planning for our 2020 season (which would have been 10 shows) was set in stone before the 2019 season had even opened last November, and long before COVID-19 began to surface in the UK. As 2020 staggered on, it became increasingly clear that life would not return to normal by this November. In July, we took the heart wrenching decision to postpone the first of our shows, more followed in August, and by September our entire season had been postponed.

A production office that is usually filled with laughter, glitter and pantomime magic was comparatively bleak – and our audiences were feeling it too, and they let us know on Social Media.

“It is very sad, a family tradition will have to be on pause”

“This is the highlight of our year on Christmas Eve […] Don’t worry, we’ll be there next year with bells on”

“Christmas will be very strange this year without an Evolution production”

This outpour of love across all wide-ranging audiences, creatives and companies filled us with more determination, to go ahead and create a safe and secure pantomime offering for socially distanced audiences. Operation Save Pantomime! It wasn’t going to be an easy task, but anything that’s worth doing never is.

Paul and Emily were in constant dialogue with our regular venues, working out if it was viable for them to run a scaled-down version of the show, because this comes with a scaled down audience. Most of the venues would be operating at less than two thirds of their normal capacity which has a huge financial impact on the show – this meant it wasn’t a viable option for some venues. This left us with 6 shows (incl. 2 co-productions). We didn’t feel it right to do one of our ‘normal pantomimes’, so instead Paul decided to create a whole new show for this new unique 2020 season.

He wanted it to be one act, to minimise moving around and interaction amongst audiences to ensure absolute safety within the auditorium. But despite being an act shorter the show had to encompass Evolution Pantomimes’ ‘greatest hits’, including: A fat bloke in a dress; a cart of quick fire puns; and a legendary ghost gag bench – it was important for Paul and Emily that audiences wouldn’t be robbed of the joy of pantomime.

This was the spark for our socially distanced season. Different titles around the country, but a new story, with a classic pantomime feel. An evil malevolent Baddie has stolen the joy of panto, and it’s up to the Dame, Billy and Jill to save the very essence of pantomime – with the help of a Fairy, of course!

As the actors won’t be wearing masks on stage, Paul has written the script with the actors safety in mind; entrances and exits are all meticulously planned to ensure actors don’t cross paths unsafely, and the show will be blocked keeping them at a safe distance at all times. There must also be extra consideration for their general well-being; a reduced cast means each actor is on stage for a much higher percentage of the show than normal, and to combat lower audience capacities the actors will be performing more shows in a day, and all of this needs to be factored into the writing and directing of the show.

Paul has even planned out the most effective (and funny) way to have a socially distanced Ghost Gag Bench! This raised further questions: are audiences so sick of living through this for the last year, that they want to escape to the pantomime and live in a COVID free world for at least 70 minutes? Unfortunately, the real world doesn’t let us ignore it; the audiences would be sat in bubbles wearing masks. This has a very real impact on the feel of the show, so we thought it best to address that from the onset and make fun of it – it’s what we do! Pantomime is fundamentally British, and if there is one thing Brits do, is laugh at adversity; so, let’s laugh at this absurdity together.

Despite getting in all the great bits audiences love, it would be remiss to say it’s exactly like a normal pantomime. It’s of course much shorter, which means less singing and dancing. We are also unable to employ an ensemble (both professional or juvenile) as everyone must be socially distanced on stage, we are unable to safely do a lot of tricks and stage magic we often use. Even the set has to be carefully thought out and re-designed: we are only allowed a limited number of theatre crew on stage at the same time, which makes big set changes impossible!

Perhaps the most dramatic change for 2020 is the role of the audience. The character they play is integral to the artform: they are as much a part of the story as any of the other characters, and audiences know their role like the back of their hand. Government guidance deemed us unable to encourage participation (participation that is the very lifeblood of pantomime). This exclusion goes against the pantomimic instincts of our directors, actors and audiences, prompting the teams to devise new ways to engage the audience. Without the actor-audience interaction the essence of pantomime, as mentioned in the show, is lost.

But regardless of the challenges, it felt important to create a show for 2020. Not only culturally important, but economically important. Pantomime is the cornerstone of venues up and down the country. As the festive season drew nearer, we watched every Governmental Announcement with bated breath: Recovery Funds and Operation Sleeping Beauty were welcomed positively. The commitment to opening theatres for Christmas and the understanding that COVID-secure buildings would be viable, even in Tier 3 lockdown. Pantomime is saved…

… We thought. A recent Government U-Turn saw a change to the tier system, that does not allow theatres and other indoor entertainment to open in Tier 3. Two of our venues were situated in Tier 2 and able to rehearse and open as intended. Unfortunately, the other four venues were in Tier 3, meaning they could rehearse but unable to open without a drop to Tier 2. A drop that unfortunately never happened for them. So, those four shows are all fit up, actors on standby desperate to perform – but unable too.

We are thrilled that two of our shows have managed to open – and the audience response has been astounding and heart-warming! We are touched, humbled and amazed at the positive responses and attitudes from all our hard-working teams, and the teams at the venues we work with and their determination to make a season happen safely, despite the roadblocks.

Evolution have not lost all hope yet, we are looking into different ways our audiences can join us this season. Keep your eyes peeled…

Emily read French and Italian literature at Oxford University and subsequently worked as a Production Manager for a company who made high-end cinema commercials. During this period she worked with esteemed British film director, Jonathan Glazer, on projects for Stella Artois, Levis and the famous Guinness ads, as well as his film Birth starring Nicole Kidman. However, live theatre was always Emily’s passion and producing pantomimes was perhaps a pre-destined fate for Kent-based Emily; her Great-grandfather toured Variety and Pierrot shows all over the country during the early 1900s, and her parents are a theatrical producer and designer. Evolution is very much a family business as Emily works alongside her mother as well as her husband. She also juggles the huge demands of the business with having a young family. Her three beautiful children, Freddie, Poppy and Jago are proud owners of the Guinness World Record for the most pantomimes watched in one year. Emily hopes this isn’t child cruelty!