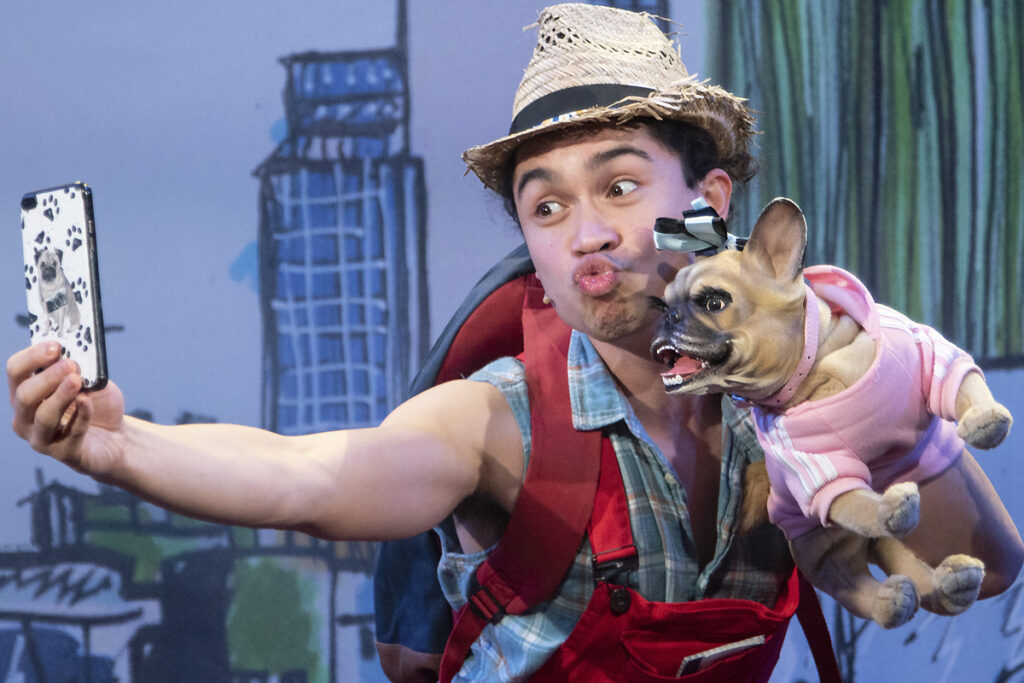 Panto in a Pandemic: Above the Stag Theatre, London

Note: Dick Whittington: A New Dick in Town plays at Above The Stag Theatre, London, until 28 February. Due to London being placed in Tier Three from Wednesday 16 December, the production is currently paused until able to re-open.

I’ve just watched the first performance of our adult pantomime, Dick Whittington: A New Dick in Town and boy am I relieved. Above The Stag is a small theatre, but we’re used to playing to sold out houses where laughter can roll in waves through the audience. The idea of playing comedy to distanced theatregoers, restricted to just over a third of capacity, was terrifying. Have you ever sat in a theatre watching a comedy you’ve written while all around you is stubborn silence? (I have, thankfully very rarely, and it’s an experience I wouldn’t wish on Michael Gove). But: yay! There was a real buzz before the show as people were shown to their seats, drinks were served to them in the auditorium, Christmas music played and Jamie Platt’s pretty pre-show lighting twinkled across David Shield’s hand-drawn front-cloth of the London skyline.

The overture plays, the opening number begins. Laughter is forthcoming: ok. People have missed this. They want to have a good time.

I’m not sure exactly when we decided to set part of Dick Whittington in London’s most inappropriately jolly undertaker’s (“we put the fun into funerals!”) but it was pretty early in the year, before we knew quite how much of a horror-show Covid was going to prove for so many or for how long.

Dick Whittington comes to London and takes a job at Fitzwarren’s Funerals, run by Cyril Fitzwarren and his wife Sarah, our Dame, who prepares the bodies of late loved-ones for their families with more enthusiasm than skill:

“Have you completed Mrs Weatherington’s hair and make-up?”
“I have. She’s the one with the braids and the bright orange tan.”
“I don’t think so.”
“She is now.”

Cyril has just emerged from several months of strict self-isolation and still obsessively keeps two metres from everyone, even – especially – from his wife. It’s a good source of physical comedy, but for Cyril, distancing is less a health precaution than it is a convenient cover for his fear of intimacy with Sarah. It’s funnier than it sounds – and when they do find their spark again they get a very romantic-slash-graphic kiss, thanks to an increasingly lipstick-smeared sheet of Perspex. One of the things I love about writing panto for adults is that you can explore the dynamics and tensions within relationships like this, as well as charting the excitement of a new romance. (The other thing I love is having license to be as inventively obscene possible – our jokes were described in The Guardian last year as “both ingenious and supremely disgusting”. My mother would have been so proud…)

Cyril’s distancing might be an even more effective device were the rest of the cast not also having to maintain space between each other, which we’d barely anticipated when we finished our first draft in early July. Either the show would go ahead as part of a joyful return to normality, or it wouldn’t happen at all – the Schrödinger’s cat of pantomimes. Instead, here we are in a precarious in-between world and a let’s-not-even-think-about-it fear of what might happen after the country lets loose for five days over Christmas. We’re meant to run till the end of February. Tier Two or Tier Three? We could all be in tiers…

This being panto, naturally we also have a story of new young love, between our ambitious hero and Cyril’s son, Alex Fitzwarren. And that’s where distancing has proved challenging – how do you create a sense of intimacy when our actors can’t be intimate; when they can’t even face each other while singing romantic (if rude) lyrics to each other? Another challenge for our endlessly inventive director, Andrew Beckett, was the decision that each prop should be handled by only one performer. Tricky in a show where Queen Rat plants stolen money on Dick and someone else finds it, and in which there’s a scene involving a functioning parachute and a faulty parachute repeatedly being swapped. Solving these problems has been a source of exasperation, hilarity and ingenuity in the rehearsal room.

When at the end of summer, to my amazement, Above The Stag Theatre decided that they would do anything possible to make panto happen, we got to work rewriting the script. The biggest change was reducing the cast from eight to five (sadly we’re employing three or four fewer actors than we would in a usual year, due to both economic reasons and the practicality of staging a show within current guidelines). One character was cut, leaving our villain without a sidekick to performatively explain her evil schemes to – well no matter, it’s panto, we can explain things directly to the audience. Two characters became one. And Dick’s pug Ariana (he’s a dog gay, not a cat gay) is now played by a puppet. These aren’t challenges on the scale of those faced by medics or politicians this year, but society needs its jesters and storytellers too.

We also had to think our way out of many of pantomime’s traditions. We’re doing our damnedest to make audiences laugh but we can’t encourage mass shouting, such as booing our villain. (“There’s this virus around, you might have heard / So if you see her, don’t boo – flip her the bird”). The song-sheet has become an audience clap-along; our technical director Andy Hill has come up with a clever way for one theatregoer to take part throughout the show; and Matt Baldwin, our much-loved and equally feared regular dame, can no longer get quite as intimate with the lucky punters on the front row. Fortunately he can flirt with deadly accuracy even from a distance.

We’ve resisted making the central story very Covidy. Years of doing this gig have taught me and my co-writer, Martin Hooper, that while every panto needs its topical gags, too much topicality stops being funny and just starts to sound like writers showing off that they listen to Radio 4. Dick Whittington is in any case about an infestation of rats, which is metaphor enough; more importantly people want to be transported, for panto is the most transportative of theatre forms. It’s central to the shape of the stories, which carry us from one world to another: from the royal castle to the forest in Snow White; from the mundane to the magical in Jack and the Beanstalk. In Dick, it’s from the familiar to the exotic, as he travels from London to a sunny faraway land.

It is almost ridiculous that we’re putting on a show as ambitious as this for such boutique houses. Our regular set designer David Shields and other members of the creative team always make the show look as much like a Palladium panto as it does a fringe effort, but making a production this big and bright and detailed is a thing of wonder when you think how few it can play to. I’ve been fortunate to be able to create, to play, to entertain. Others have been endlessly reconfiguring the booking system, or trying to decode to infuriatingly unclear official guidelines. There’s an army of diligent front of house staff taking temperatures, guiding people to seats and providing at-seat drinks services, all delivered with a welcoming smile.

I’m mindful too of how many shows can’t go ahead; how many brilliant people with all sorts of skills are unable to work and to do the thing that gives them purpose. How many theatres have lost not only their most bankable show but also the show that reaches its biggest and most varied audience; it’s the time of year when they are truly the heart of their community. Even for theatres like Above The Stag that have managed to go ahead, panto is not the cash injection it usually is.

Every year, our pantomimes end with the good fairy wrapping up the show with some verses, to release the audience gently back into the world. It’s always the last thing I write, because I need to get a feel for what the show is, and for the times that it’s playing in. This year I’ve included the lines:

“There‘s been stories this year what never got told,
On stage and in real life as well,
And things ain’t all been rainbows and gold,
So thank you for helping us cast our queer spell”

Dick arrives in a London most definitely not paved with gold; and while there’ve been rainbows aplenty this year there’ve been far fewer pride flags. So it’s a privilege to be offering a splash of colour to Above The Stag’s loyal and largely queer theatregoers.

Jon Bradfield and Martin Hooper’s previous panto scripts were recently published in a book: He’s Behind you! 11 Gay Pantomimes. For more information, visit Above The Stag

Jon Bradfield is the co-writer and songwriter of Above The Stag Theatre's popular adult pantomimes which have sold out every year for the last decade. With Martin Hooper he has written twelve pantos for the theatre; the musicals He Shoots! He Scores! and Get 'Em Off!; and the Stonewall era play A Hard Rain which was also produced in New York. For BBC4 and the Old Vic Theatre Jon wrote "Missing Alice", an acclaimed standalone episode of Mark Gatiss' Queers series, staring Rebecca Front as Alice. He was the lead writer on Cinderella: A Drag Pantomime at Trafalgar Studios in the West End which in 2020 was voted Best Studio 1 Show of the Decade in a public poll. His play Animal, devised with disabled activist Josh Hepple, was shortlisted for the 2020 Papatango Prize for new plays. Jon and Martin's panto scripts are published in a new volume, He's Behind You! 11 Gay Pantomimes, out now.