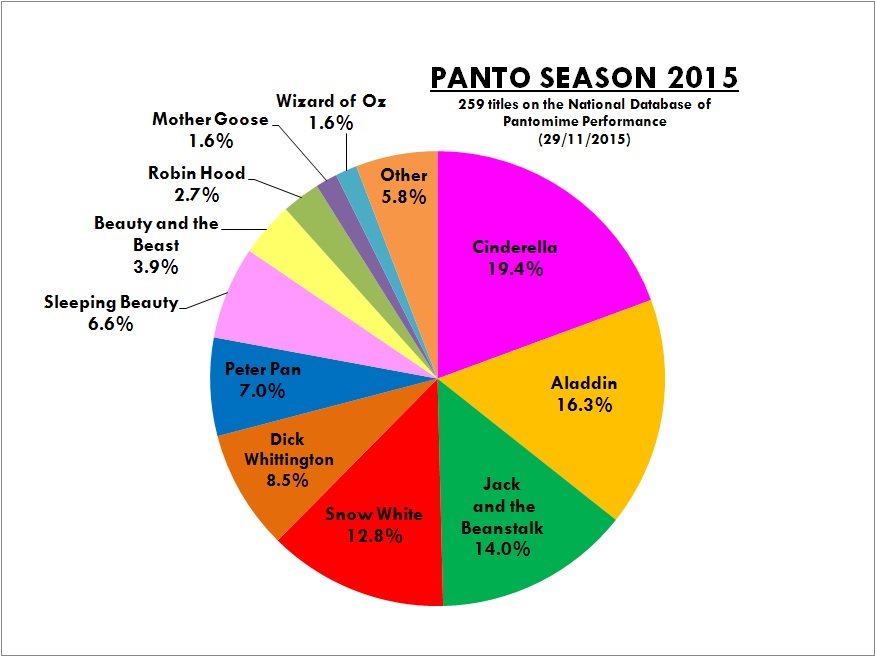 Research from the National Database of Pantomime Performance has revealed that 2015 sees a new set of titles as the UK’s most popular.

Cinderella takes the crown as this year’s most produced show with 50 productions, followed by Aladdin with 42 and Jack and the Beanstalk with 36. Over the past three years, each of these titles has won the top spot, with Snow White always coming in fourth position.

2015 sees 33 productions of Snow White produced, up three from 2014, but it is the fifth place title which sees the biggest shake up. In both 2013, the year the National Database of Pantomime Performance was founded, and 2014 Sleeping Beauty rounded off the Top 5, but this year is relegated to 7th position with only 17 productions. Completing the Top 5 line up for 2015 is Dick Whittington with 22 productions.

Sixth position goes to Peter Pan with 18 productions whilst Beauty and the Beast (10), Robin Hood (7 productions), Mother Goose and the Wizard of Oz (4 productions each) complete this year’s Top 10.

The 2015 season sees 259 professional pantomimes staged between 14th November 2015 and 5th March 2016 beginning with Mother Goose at the Oldham Coliseum and ending with Jack and his Giant Stalk at Brick Lane Music Hall.

The average pantomime run remains the same as in 2014 at 42 performances, with Dick Whittington at the Theatre Royal Newcastle the longest run of the season with 96 performances with the average ticket price 90p up from 2014 at £16.50.

This year sees a wide range of pantomime titles including The Sword in the Stone at the New Wolsey Theatre, Ipswich and Santa Claus is Coming to Town at the Pavilion Theatre, Glasgow. 2015 also provides the opportunity to see lesser known titles such as Red Riding Hood at the Greenwich Theatre and the Maltings, Berwick-upon-Tweed as well as variations on traditional themes including Dick Whittington and his Meerkat at York Theatre Royal and Dick Whittington and his Mousehole Cat at the Hall for Cornwall, Truro.

“As we course ever closer to Panto Day on December 11th, these statistics demonstrate the diversity and vitality of the pantomime industry today. Now in its third year, the National Database of Pantomime Performance is enabling us to track and trace the genre and create a wonderfully rich resource for panto passionistas and scholars of the future.”

The National Database of Pantomime Performance can be found at: www.pantoperformances.info