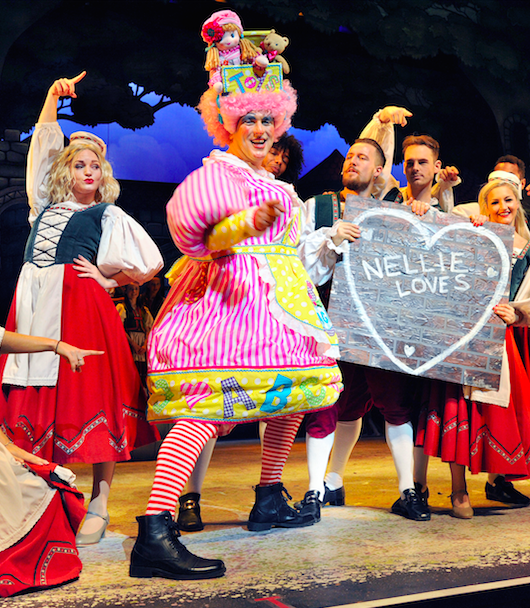 The move to Dame was a pretty slow one for me. I didn’t feel especially drawn to it as I know some do. In fact I have performed in 19 consecutive seasons of pantomime, but have only played dame for the last 4 years. Although now I’ve made the switch, I think it would be pretty hard to go back…

As a younger actor I actually played Villain for 7 years opposite the brilliant Dame of Damian Williams; a man who influenced me immensely and I believe pretty much still to be the benchmark for the modern Dame. We had 7 of the best years imaginable creating a panto in Grays that punched way above its weight. And I watched Damian work the audience effortlessly every day. I was also fortunate enough to work with the great Dave Lee, also a great inspiration.

I then made the move into comedy roles when I started working for Paul and Emily of Evolution Productions. Paul’s panto instinct is pretty faultless and his shows are very comedy heavy and it was he who suggested I should give Dame a try. After saying “No” for a few years, I decided to take the plunge with the massive encouragement of Paul and Damian.

I feel reticent to give ‘advice’ on how to play Dame as there are many others better qualified to do so. But for what it’s worth, my Dame is definitely ‘a man in a frock’ and I try to approach the character as a clown first and foremost and I made the decision not to ‘feminise’ it too much. The best advice Damian gave me was “Never rely on your costumes for laughs, it’ll get you one when you walk on but that’s it, the rest is down to you.” I think this is a good antidote to those who believe Dames are a procession of funny dresses with not much else to back it up.

When it comes to finding your own Dame I think the best thing to do is watch as much as possible and then do your own thing… The best Dames all seem to. There are so many different styles and the only common thread between them is an ability to own the stage and win the implicit trust of the audience, to let them know that they are safe in your hands.

I don’t make my own costumes, they are supplied to me by the production company, and I think it is difficult to make your own as a resident Dame as I have been l at Canterbury for 4 years because of the sheer number you’d need (I do like one on every entrance!)

As for voice, well it needs to be something you can sustain for 13 shows a week for 6 weeks so get pally with the sound man and stock up on honey and lemon!

Last bit of advice, audiences like to be told what to do. Be fearless. Look them in the eye. Wait. Let them laugh.