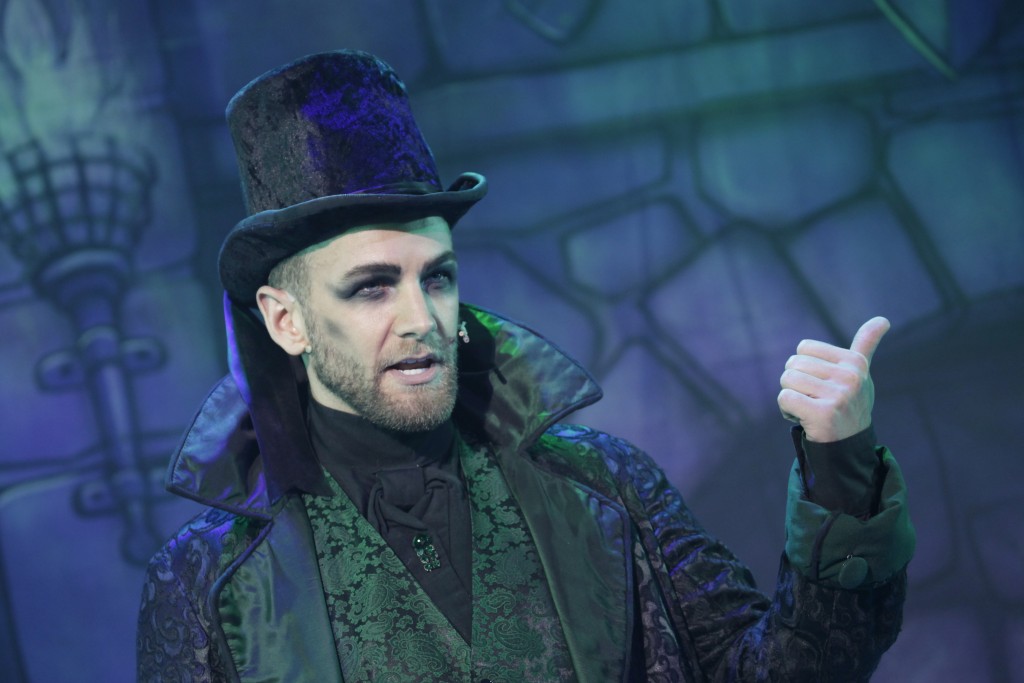 From Good to Funny to Bad

After 8 years of playing the hero, saving the day, winning the heart of the princess and being the audiences best friend.  It’s time to step onto the dark side and reverse all the good I did.

For me, the story is always paramount and must drive the pace of the show.  If the audience knows and cares for you then they are involved. That is the biggest compliment.

The difference I feel between the principal boy and comic is energy.  The comic must be relentless in enthusiasm, silliness, and ad-libs. They are the main link with the audience and must hold that bond with them.  The hero is all story and plays the ‘panto truth’ of the task at hand, to win the day and the heart of the princess.

Now I have the opportunity to play the villain Fleshcreep in ‘Jack and the Beanstalk’ at the Capitol Horsham. A very welcomed occasion.

All past experience helps and contributes to the current performance.  The biggest difference in being the villain is that I tell alternative parts of the story. The villain plans of capture and greed in the prologue and linking scenes, the hero is the recipient of these motives and therefore needed to step up, and the comic is there for the comedy routines, much-needed lightness, and humour.  So the logistics backstage for me this year is very different.

My first shock as the villain was in the photo shoot.  Being used to big smiles and producing the typical ‘panto pose’, it was odd to be asked to scorn and growl down the camera lens.  The eyeliner and costume is a big help.

All characters in pantomime are as important as the other – they are the crucial ingredients.  And surprisingly similar.  You must be truthful, have good humour, build a rapport with each other and the audience, and mostly have fun!  It’s a special time of year when work often takes us away from loved ones and family, so enjoy it.

I am having a great time playing Fleshcreep – it has ignited my mischievous side.  Similar to playing Wishee and Buttons where you can get away with trouble and practically-joking directly with the audience; I seize the opportunity to.  A week into playing Fleshcreep already during a 3-minute timed and choreographed chase routine through the audience, I have eaten someones pick-n-mix, popcorn, ice-cream, shaken up someone’s bottle of coke and given it back, stolen a little girls cuddly toy and a boys flashing wand (later returned of course), pinched a gentleman’s pint (later not returned of course), kissed and cuddled many teachers and grannys, and next step is to kidnap a child.  Some little ones who are in a state of utter fear I avoid, as we want them to come back next year.  The kids and adults who show great humour, love, and find these jokes hysterical – they are the targets.  It is already my favourite part of the show.

It’s a job like no other, and for the month of December each year I always have a truly enjoyable time, and have made some very special friends along the way.  If you’re lucky to be employed and have the opportunity to be in panto, relish it and make the most of it.  It is very quickly over and come cold January you will miss it.  Long live our British panto traditions.