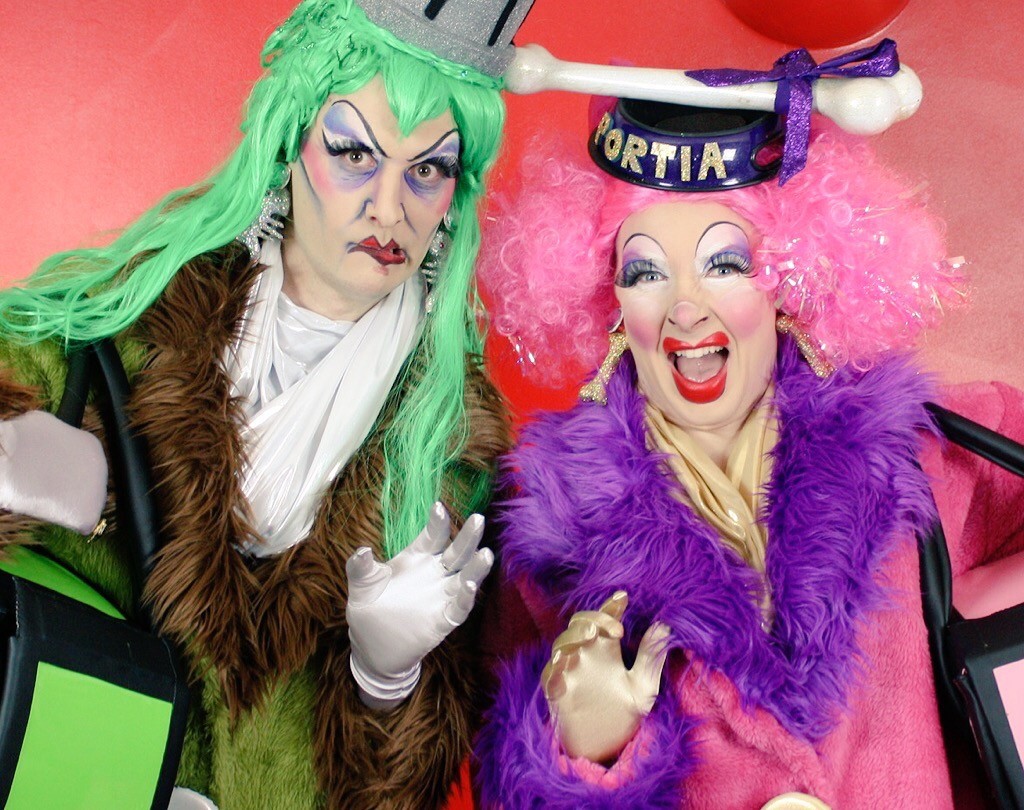 By Olly Taylor and Steve King – The Wugly Sisters

Pantomime because of it’s roots in commedia del’arte is brimming with archetypes. Characters stripped back to reveal stark examples of human nature and then writ large upon the stage in a grotesque manner. Of course it has been dragged through vaudeville gaining all the knock about “business” and Music Hall traditions that we all like to see in our modern pantomimes. It’s amusing that the word “pantomime” itself doesn’t mean the show we expect to see on stage these days. From the original Latin word, the ‘Pantomimus’ was a nonspeaking dancer who told stories through movement and gesture with various masks, but masks that still allowed the facial expressions to be read. Ironically the pantomimi avoided farce and coarse humour in their performances… So what has all this got to do with developing the kind of character you may wish to play in a modern pantomime you ask?

Well we highlight the above to show how it ties in with our own journey in creating our characters and what has become “The Wugly Sisters”. When asked to write this article of advice on developing character we thought we could only illustrate our own journey and process. We hope it offers either food for thought some kind of help or even a bone of contempt for others to say “I wouldn’t do it like that!”

As already explored in the excellent article by Ian Smith and Michael J Batchelor a good Ugly Sister act is based upon a solid friendship, they know their own strengths and who they are as actors. We had both been friends for a long time, originally meeting working on some shows, but then our careers went in different directions and we no longer had the opportunity to work together. However we just knew the dynamic between us had some potential and we also knew that we both loved Panto, we did not however think of immediately being sisters together!

Early on we realised “who we were”, that is we both knew who we were not. Neither of us would successfully be a Prince or a Silly Billy for example. As Panto is based on such stark characters recognising how you as an individual fit into these archetypes is key. There is of course the nature of the characters to identify with and the type of humour or performance expected from them by the audience. In addition there is also an unwritten rule of physicality. Though not a hard and fast rule there are things we internally expect of our panto archetypes; the Prince is quite handsome, he should really be taller than the Princess. The Villain should be imposing, the comic should be vulnerable etc. Have you ever left a show and thought “That was great, they performed brilliantly, but maybe he or she was the wrong shape/size for that character?”

From this we knew that one of us was more fitted to a villainous role both in shape and style and the other more akin to a dame role. The sum of our parts had something to offer so we then looked at where the “double acts” were in the main titles of pantomime. The policeman from Aladdin were certainly not a fit nor the Baron and Brokersman, then the ‘sisters’ came into view.

It was quite clear that we could physically fit the “sister” archetype as outlined elsewhere. I.e taller/thinner sister verses a shorter/wider sister. As we pursued this we realised both in performance style, and design of what we might wear, the characters individuality could be not only be defined but also the collective dynamic made strong. So it emerged that the taller ‘Dot’ could be the sharper, more sinister sister and ‘Babs’ could be played more sexualised and the dumber of the two. We liken it to Hot and Cold – they are different, but belong together. Once we had defined this idea in our minds it started to inform everything we did to develop the characters further. Like lots of villains, the ‘sisters’ are essentially in pain – ugly on the inside, so that they never achieve beauty. They are playground bullies, so envious of Cinderella that it forces them to the edge. All this informs our decisions when looking at a script “would Babs or Dot be more likely to say that?”

We knew early on that we could and should look at developing our own costumes. Growing up we had both separately come to love the variety and vaudeville acts that were still about on TV in the early eighties. There were the big props and illusions of Paul Daniels, gimmicks of Bernie Clifton and Rod Hull all around. As children we had tried our own hands at magic, puppetry, and alike and gone on to pursue careers involving them. So following that age old saying for any kind of person in the arts “do what you know” we sought about integrating our influences into our characters. We soon found that through the design of costumes our characters could be writ large on the stage. For example there are certain blocks of colour that only ‘Dot’ wears and ‘Babs’ does not and vice versa. Inevitably there is some cross over but ‘Dot’ will never be dominantly pink nor ‘Babs’ green. Likewise shape plays a part too, the character of ‘Dot’ is reflected by more angles or a harsher shape whereas ‘Babs’ wears more rounded outfits.

Much like the masks of the Pantomimus our outfits are designed in such a way that the character can be projected through the visual to be seen at the back of the auditorium. If an outfit features zebra stripes, an off the peg fabric often won’t be suitable as the pattern is too small, so we appliqué stripes to create our own fabric so it can be clearly seen from the back. In addition in keeping of the visual humour of variety and vaudeville acts of old we wanted our costumes to have gimmicks, most of them to have a ‘surprise’ that can be revealed later in the scene.

Continuing in this manner we came to the make up. Working with a designer we endeavoured to have a make up that would allow our facial expressions to be read, as well as complement one another and show the different natures of the characters once again. Yet again the roundness and plumptiousness of Babs are in the makeup and emphasis of the angular are in Dot’s makeup. Signifiers of the underlying characters.

Costume and makeup alone however are but tools. In developing our characters further we looked at how they might move or gesture to try to delineate and compliment our two characters. The design of the costumes aid this but we never wanted the costumes to be left to ‘do all the work’ and it seem as if we were coasting performance wise. As a general rule in keeping with her character Dot is more poised with long pointed gesture changing from angular shape to shape and Babs has bounce to everything she does.

It’s important to note what function your character serves in the show. The ticket tearing scene is the pivotal point for the sisters. It has to be terrifying, if it’s not then Cinderella as a plot becomes devoid of threat but at other times the sisters are comedic. So as a performer it is necessary to have sweeping changes of attitude within the show. We have backed these moments up with the style of outfits we wear. Our most stark and imposing creations are saved for the ticket scene for example.

So our approach is really all about having as much clarity as possible with our characters. Clear, distinct individuals. Recognisable archetypes. Strong, clean visuals that can be seen at the back. Clarity of purpose and energy. We by no means claim expertise and for us The Wugly Sisters are a continual learning and honing process. Each new show informs the placement of a joke, the drama of a moment and the energy with which to play it. We’ve tried to take what we have learnt and enjoyed over the years and put it into our work, to be mindful of the traditions and expectations of the audience for the genre. However to also try and reflect modern attitudes of an ordinance in how we look, what material we bring to them and how we deliver it to them.

Have a well-ugly Panto Season!