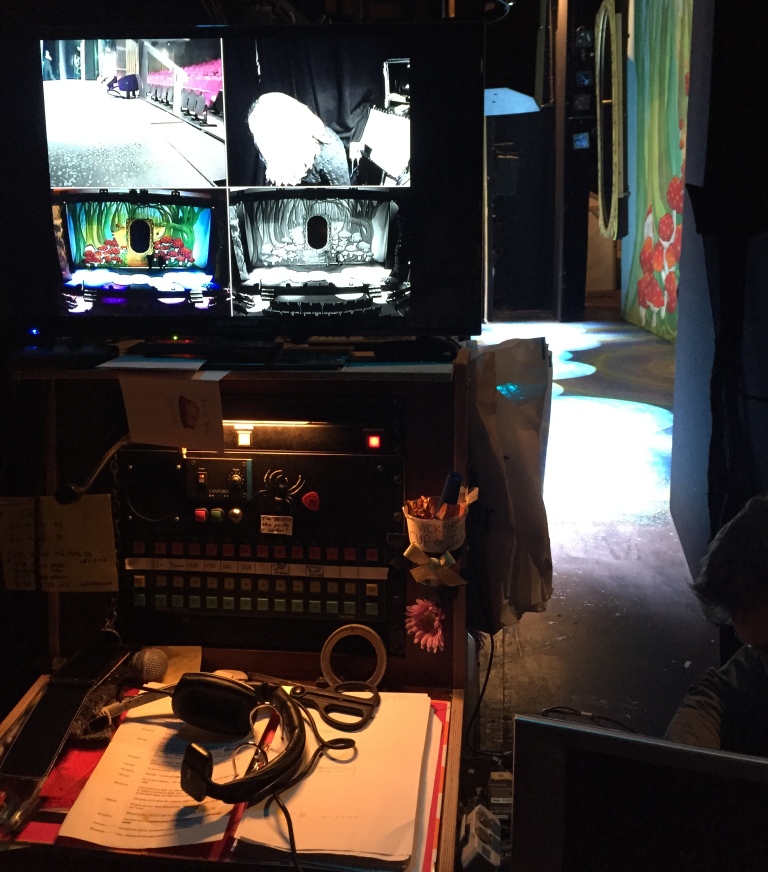 I started working on panto sixteen years ago at the Yvonne Arnaud Theatre as a member of the stage crew; my first cue was to fly john in Peter Pan, I also ended up squashed into a truck to operate a duck puppet that was pulled across the stage by my crew mates….over the years I have thrown butter through holes in the set, operated dry ice to make cloud land for jack, flown numerous cloths, fired pyros and cleared up a lot of custard pies in blackouts!

So 16 years later and I’m still here but now I sit at the prompt desk as the DSM and have done so for the last 4 years. It was a strange day when no longer part of the crew I was suddenly thrust into the rehearsal room to experience the creative side of the pre-production process.

The best time for me now has to be when we are in the theatre teching, the problem solving and general polishing of every factor of the show to get it ready for the public. The first show is always electric and I sit at the centre of it all, calling the actors to the stage, calling lighting and sound cues and this year I have the magic button that operates the magic mirror for the wicked queen! I get to watch the show everyday on my tiny screen and hear the reactions of the audience and get the buzz from the performers when they are in full flight!

The great thing about panto is every show can be slightly different, whether it’s the actors ad-libbing or having to make quick decisions about cues or hunting down missing props, it all keeps my job exciting and fresh each day, likewise the routine of shows and the unchanged lee factors can become second nature very quickly allowing the other element of working on panto at the Yvonne Arnaud Theatre to come about, and that is the social side of the company atmosphere.

Over the years  I have become a sort of undesignated social secretary and several events are now deemed a huge part of the panto period for both crew and cast, we also like to involve management and foh in our events as its so important that everyone sees all aspects of running this theatre and particularly making pantomime a happy and fun time for audiences and company.

We have quiz night which was designed as an ice-breaker and now in its sixth year it’s attended by nearly 50 members of staff from cast, catering, front of house, crew and top level management, it’s a highly competitive evening and really kicks off the social side of panto.

Closer to Christmas Day we also have the ‘grab bag ‘ event and party on stage in between shows, it’s a secret Santa for all cast and crew and even Father Christmas attends to give out the pressies, this always highlights the generosity of the crew who share the cost of a very fine buffet laid on for the company!

Possibly my favourite event has to be the cod, this is a tradition not seen in every theatre but I have been taking charge of the cod for the last 14 years, collating all the ideas from the crew I write a 40 minute script and have about 3 hrs over three days to direct and choreograph (challenging with technicians) the performance….in the early days we had sixty or so audience who came to the late night performance now in the region of two hundred attend the one off performance and we raise anything from £500-£1000 for charity, last year the crew cod bought the theatre a defibrillator in memory of a dear friend we lost only last year.

All of this and the fact that I just can’t seem to shake PANTO from my life is a testament to the family feeling you get from working in a unique establishment like the Arnaud theatre, I’m sure everyone may say that they work in the best theatre but I really mean it, 16 years has to be the proof of that!!