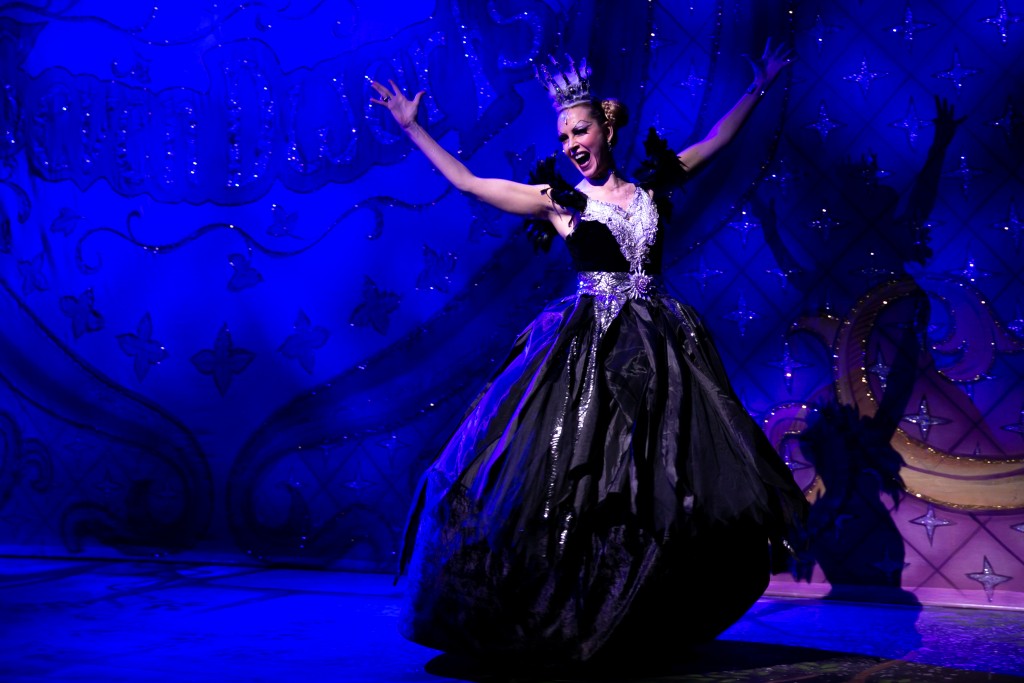 Being the Best at being Bad

After starting off my panto life playing princesses, I then had a few years in comedy roles – fairies etc and then made the transition into the baddie and I’ve never looked back.

Nothing can beat walking out to a sea of boos night after night. It sounds a bit mean but the sound of a small child crying within minutes means you’re doing a good job – and you know that very soon they will be fine and willing on the heroes to beat the ‘nasty lady’. I think it’s important not to dumb down the nasty. It’s part of the experience and the story should be told as truthfully as it can be in my opinion. Occasionally I have met children in the interval – or much earlier – when they are too frightened to be in the auditorium – and we have a chat about it all and they go back in – happy in the knowledge that they can help the ‘goodies’ defeat me.

When you are in the same theatre each year, it’s important to make every character completely different and I’m lucky enough to have brilliant scripts provided each year by Brad Fitt (along with Simon Fielding’s vision of the characters) which allow me to do just that. Last year I was a female Abanazer – purporting as a male (complete with moustache) for half of the show. I’ve been a truly evil queen, an Essex mum of 7 children, and this year I am German.

As well as the portrayal of the character I try to look as different as possible too. This year has resulted in all manner of hair pieces and wigs and a prosthetic nose as well as 8 different costume changes. I am not a tidy person generally so I have to work hard to try to contain my mess and ensure each change is swift and seamless. It can always go awry – especially on a three show day when you’ve already changed your clothes 16 times and are struggling to remember what comes next.

The schedule for panto is relentless so you need to take care of yourself. In the early years I could party with the best of them after a show but a few years on – and with the move to playing baddie – and I’m usually straight home for a honey and lemon in front of I’m a Celebrity with my dog (Rock n Roll I know).

Sometimes as baddie the volume from the audience – particularly in school shows – can be deafening. I find rather than trying to battle with them and top them it’s more effective to speak softly for a few sentences and they soon quieten down as they want to hear what you’re saying. If you try and shout over them, they enjoy the battle and get louder and you have over 60 shows to get through so you can’t be doing that.

On that note – you really have to look after your voice. There is a company vocal warm up before every show and after spending some time with a speech and language therapist last year, I now blow bubbles through a straw into some water – and hum – much to everyone else’s amusement – but it’s the optimum pressure to get your vocal chords to meet and I always end up with more voice from doing that than any other vocal exercise. I always try to ensure that I do as little as possible on a day off too. I try not to talk to anyone at all and usually go for a massage or see my osteopath for an MOT as dancing and walking in heels is a nightmare for me as I usually spend my life in trainers.

Make up is a fun part of the job – changing your face to make yourself look completely different  – and soon you find you are doing a full face in no time at all. Generally my makeup is of high quality – MAC heavily features and Dolly Lashes are a new find for me this year which last for at least 20 wears. You can sometimes find some bargain gems as staples which you need – Primark do great lip liners and eye liners and you get through so much that it’s a blessing when you find a bargain which does the job as well or better than an expensive version. Foundation though needs to be a good one or it will just slip off through the blood, sweat and tears and you’ll go through three times as much.

I think it’s important to give everyone a hard time – adults and children alike. You can’t beat a heckler or a small child shouting randomly when they are caught up in the story which completely sends you a curve ball and they can’t wait to see your reaction and how you deal with it – and I never tire of ‘throwing some shade’ on someone who tries to outsmart me.

I often get asked if I would rather go back to playing a goodie and I’d never say never but I honestly think the baddies are the best fun to play.  Break a leg to all the panto baddies this year – may your voice be with you!